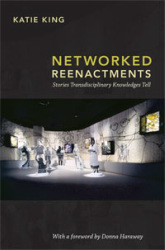 In the nineties, in not altogether voluntary partnership with the web, television had to learn not only to “show” but also to “tell,” discovering for commercial and technical reasons and for widely diverging audiences how to distribute stories and information engaging all the senses across platforms and infrastructures. Media scholars today call this phenomenon transmedia storytelling. Stories in this book suggest how this transmedia practice came about and how thoroughly entangled it is with the European Union’s cultural, racial and sexual economies creating action-adventure TV shows Highlander and Xena, with U.S. museum politics at the Smithsonian’s Science in American Life, with transnational melodramas of science-styled TV reenactments such as Secrets of Lost Empires and African-American Lives, and with Australian, British and U.S. scholarly experiments making, sharing and demonstrating knowledges from the humanities to various publics, all of whom have their very own ideas about how to understand the past. Pressured to justify themselves to and as various publics promoting heritage and enterprise, television, the web, assertive fans, un-black-boxing educators and intellectual entrepreneurs took jobs of “reception” seriously and practiced them in transdisciplinary detail. Reenactments became a particular way to both show and tell, reenactors a kind of communication technology themselves, scaled both as persons, and also as elements in immersive environments now eddying among knowledge worlds. All this took place as entertainment media, knowledge work and global academies mutually restructured. These stories about reenactment melodramas demonstrate the affects and ethics of sifting through and managing authoritative and alternative knowledges within what may be an emergent, maybe even feminist, posthumanities. • See also: https://www.facebook.com/note.php?note_id=500821704695  [download]

Theory in Its Feminist Travels: Conversations in US women’s movements (Indiana, 1994) uses methods that emerge from research into feminism and writing technologies. It analyzes feminist theory as many objects of knowledge, constructed over time within competing feminist politics and conversations. Conversations are units of political agency in action in theoretical discourse. They may overlap among more than written theorizations -- oratory, group production, private oralities, public actions -- or they may be reflected in varieties or versions of informal writing or circulating manuscripts. Conversations reflect shifting alliances and the production of new political identities. The book self-consciously develops methodology intended to make conversations possible across feminist political and disciplinary divides.

Speaking with Things, a transdisciplinary approach to writing technologies. (In progress). Why examine writing technologies as the broader historical and cross-cultural category into which new technologies and media fall? As publication absorbs the internet, converges with television, telephone and their broadcast, satellite and cable systems of delivery, we find that words, images, sounds altogether extend "writing" beyond inscription as multiple forms of action. As "writing" and "technologies" alter in meaning before our eyes, startlingly, so do their pasts. Analytic divisions among oral, handwritten, print, and electronic communication that appeared useful once, obscure convergences of historic importance as they rely upon problematic distinctions between nature and culture. Interestingly enough, when we alter what counts as technology, what counts as culture, we open up realities in which the contributions of women to writing technologies historically become visibly more numerous, more valuable and increasingly complex. Examples in this book illustrate richly and model why one would want to engage technologies in this way, and also how to do so. [Photograph: National Gallery of Art]

Demonstrations and Experiments: Quakers, plain style, and the Scientific Revolution. (In progress). Plain style surprisingly connects Quaker reenactments after the English Revolution with those of the Royal Society in seventeenth-century origins. [Photograph: Martin Godwin for the Guardian]
• Amazon Author page: Katie King