Something happened toward the end of the nineties. Before then, starting in the early- to mid-eighties and on, the time when I first began to use the term writing technologies, every time I used it -- in talks, my dissertation, commentary at conferences, articles, class syllabi, research colloquia, now ancient websites, fellowship applications and projects, book prospectuses, and in talking to folks generally -- I was pressed to explain it. It was never a phrase that explained itself. I have written mini-essay length footnotes and sections of chapters, given formal talks in my attempts to describe, contribute to and create where it has, does and might take us among knowledge worlds, what kinds of power-knowledge relationships it opens out upon.

But something happened. Over the nineties, somewhere toward its end and into the next decade, the term, or some variant, began to explain itself. It began to be taken for granted and even to belong to particular communities of practice. Instead of something ‘happening,’ it had already happened. In ordinary language it appeared casually. Its referents were sometimes historical -- past writing technologies -- and sometimes current. From that decade to the next scholarly books began to pick around its variants and even museum exhibitions took up ‘Technologies of Writing.’ Today's writing technologies no longer needed some slight of mind to come into relief -- there they were, intrusively obvious, and often claimed. The Web -- once a quirky oddity for techies I could point to and play around with, a material example of a then counter-intuitive convergence and recombination, one across forms of inscription and meaning making devices -- that Web was there, beyond ‘accessibility,’ in that fictional everywhere of ‘everyone's’ lives. Even my cognitively challenged eighty six year old mom began to use the term, unself-consciously talking to her nursing home crowd while she manipulated her iPod. 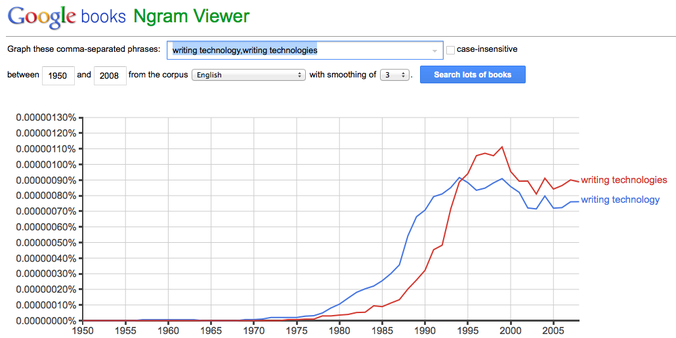 Being inside and moved around literally by the very material and conceptual structures you are analyzing and writing about is a kind of self-consciousness only partially available for explicit discussion. And so we find ourselves in the midst of an emerging posthumanities, where humans are only some of the agencies self-organizing in altering systems of things, people and worldly processes. Writing obliquely now is often a necessity for describing research into these alterations -- because moving among knowledges technically detailed also necessitates telescoping out to engage infrastructures in their layered accretions. Such doubled, transdisciplinary consciousness is not an obstinate refusal to be specific or propose something in particular. Instead, out of these enlivened sensitivities, saying what counts as using writing technologies has to be oblique -- that is to say, has to diverge perpendicularly, across the normative. Such analysis works performatively, as both a demonstration of the very sensations of cognition and a simulation of and for writing technologies. I have expressed all these through an examination of one set of converging knowledge forms: Reenactments are examples of writing technologies in dynamic movement in the nineties. My latest book, Networked Reenactments, works to demonstrate transdisciplinary movements since the nineties across this range of writing technologies, as knowledge workings themselves become embedded within culture industries and transnational educational restructuring projects. [link for this Ngram in Viewer]

Writing technologies always literalized for me tensions in grammatology, between both Ignace Gelb's and Jacques Derrida's uses of grammatology, that is to say, between writing's many possible referent/sign relationships in historical progression (Gelb) and that call to account of assumptions about writing's derivations from speech built into the assertion of these relationships (Derrida on logocentrism). Working with Derrida, but literalizing tensions between these grammatologies, writing technologies are thickly described in my work as activities, skills and devices in layered assemblages, material and conceptual -- some including inscription, but none limited to and by it.

And what are writing technologies now? A something established and named, authoritatively vetted in scholarly apparatus? I am only too aware of being caught up in the history of now, how intertwined with, dependant upon writing technologies I am, but also how dislocating writing technologies are, as I work among them, even are them. I cannot help but mime that understanding of Derridean differance not only as our hinge between speech and writing, but also as a performance of deferral....

So my recent book, Networked Reenactments, is a demonstration that writing technologies and reenactments and movement among knowledge worlds require understanding authorships, audiences and agencies in ways that keep redrawing forms of inclusion and exclusion, virtually moment to moment. Thus it is another literalizing attempt to work amid, describe, and engage with and as writing technologies, however spare or capaciously drawn, moving among various communities of practice and among audiences and authorships, while offering its own demonstration of a way to engage an emergent feminist transdisciplinary posthumanities. {download].
• Google Ngram Viewer for writing technologies